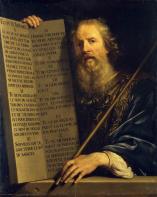 In a previous post Trickster Donald Trump, Carl Jung’s essay On the psychology of the trickster was used to analyze Donald Trump psyche. Jung pointed out that at the end of the trickster cycle the behavior of a savior arises. Examining Trumps rhetoric it appears that he is seeing himself as Christ, “taking on the arrow of the media” to save his followers and lead them into the Promised Land of Republican controlled government. Jung cautions us that when dealing with a Trickster we must remain alert to his tricks. I think we saw one developing that was identified in the entries Atlas is Shrugging!, Trump: The Killing Trick, and Trump: A Space-Time Traveler. However, we cannot let down our guard – Donald is tricky and last week he shifted from a New Testament Savior, Christ; to the Old Testament Savior, Moses.

Last week Donald Trump went up to the top of his Trump Tower to meet with God, who gave him his Ethics Plan – A Tablet of Six Commandments, which he outlined in his Gettysburg Address to faithful followers. I listened and immediately saw that Trump’s Ethics Plan is Old Testament – it comes down to us as rules that must be followed if he is elected. After thousands of years of the Old Testament’s 10 Commandments how ethical are we – it is getting worse! It seems that Trump is unaware that there is a New Testament Ethic that puts the responsibility on the Individual to behave ethically. To understand the New Depth Ethic one has to be self-reflective, not a level of differentiation that Donald’s psyche has yet reached! However, after 116 years of trying to live this New Ethic, we are still getting worse! Does the continuum hypothesis apply to The Mathematics of Faith?, is there no way that “loving thy neighbor as thy Self” can be actualized. After all what do we expect – we do not even know how to love our Self! sas

A New Depth Ethic
Deep Jesus, Us?
The Mathematics of Faith?

4 Responses to Trump: A New Moses