The Mathematical Challenge to Darwin and Wallace 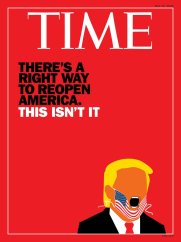 Time Magazine since February’s outbreak of Covid-19 has often had images of President Trump wearing a medical mask. The latest issue May 25 has a faceless, yellow hair, yelling mouth, with a mask of the Flag pulled down around his chin – the lead story is There’s a right way to reopen America. This isn’t it. The View essay – “We’ve been here before” by Jeffrey Kluger caught my attention with a photo of a boy that could have been me in 1954 getting his Salk polio serum. I still remember that summer living with family in Fargo at 1533 10th Street South and mom requiring us to take a long afternoon nap as part of the efforts to address polio. A point Kluger makes is that our current coronavirus epidemic is better compared to the 1916 polio epidemic than to the 1918 flu epidemic. His reason is that the effort to produce a vaccine for the 1916 polio epidemic took 38 years, and giving a premature polio vaccination to hundreds of children in 1938 gave hundreds of children polio.

Another essay in this Time issue is “How is Covid-19 affecting our mental health” by Markham Heid. The details of how this pandemic is affecting us psychologically waits for another post. What is of interest now is how our grandparents faced the 1916 epidemic compared to how we are facing 2020 epidemic. Our grandparents had no radio, TV, Internet, Google, Netflix, they were really ‘home alone’! As a writer, I have been ‘home alone’ for some time so, C-19 has not seemed to have affected my staying at-home routine. However, what is now unfolding I am coming to realize is influencing me by the “world climate” created by the coronavirus. I am not going out today so let me try to illustrate this by what I am doing at home alone.

I suspect that many have a distant and vague memory of learning about Darwin and Wallace’s independent and that I suggest are synchronistic discoveries of the Laws of Natural Selection.  I  just took a fascinating journey with Darwin on the Beagle in the BBC 7 part movie The Voyage of Charles Darwin. Wow, what a thrill watching this last week –  I was not in my den at home but on the Beagle shorting through specimens with Charles. I often sat on my porch to feel the breeze imaging I was on the Beagle’s upper deck with Captin Robert FitzRoy. Part 7 of The Voyage of Charles Darwin is the return to England and his struggle to commit himself to write and publish his findings. Darwin was finally moved to publish by  The Forgotten Voyage: Alfred Russel Wallace and his discovery of evolution by natural selection.

The Forgotten Voyage: Alfred Russel Wallace and his discovery of evolution by natural selection.

The Making of a Theory: Darwin, Wallace, and Natural Selection bring together these thinkers in the making of the Theory of Natural Selection. I suggest we might consider this a synchronistic experience. Darwin and Wallace became close friends.

I recently watched an interview on the mathematical challenges to Charles Darwin’s  The Origin of Species by Means of Natural Selection, or the Preservation of Favoured Races in the Struggle for Life which is very thought-provoking. At the end of the Mathematical Challenges to Darwin’s Theory of Evolution, the interviewer Peter Robinson asks his guest scientists David Berlinski, David Gelernter, and Stephen Meyer about the contributions of Karl Marx, Sigmund Freud, and Charles Darwin. The Davids disparage Marx and applaud Freud – but Meyer sees deep into the question by saying all three thinkers made important contributions to the issue of consciousness under discussion. Meyer explains, “It is good to group their ideas together. Darwinism has become the foundation of our ‘world view’ and we need to look at the questions these three addressed: Darwin tells us where we came from, Marx offers a utopian vision of the future, and Freud tells us what to do about our guilt. Between the three of these great materialistic thinkers of the 19th – 20th Century they form the basis of a comprehensive world view. They answer all the questions that Judeo-Christian thought addresses.” What intrigues me is the comments that “the complexity of the cell, the building block of life, is increasing as the Universe expands.” What are the implications of this fact?  Mathematical Challenges to Darwin’s Theory of Evolution was recorded on June 6, 2019 in Italy (Uncommon Knowledge).

Uncommon Knowledge with David Berlinski on “The Deniable Darwin” Jul 8, 2019 addresses the issue, “Is Charles Darwin’s theory fundamentally deficient? David Berlinski makes his case, noting that most species enter the evolutionary order fully formed and then depart unchanged. Where there should be evolution, there is stasis. So, was Darwin wrong? David Berlinski is a senior fellow at the Discovery Institute’s Center for Science and Culture, a contributing editor at Inference: International Review of Science, and author of many books. Berlinski discusses his book The Deniable Darwin and lays out how Charles Darwin has failed to explain the origin of species through his theory of evolution. Berlinski explains that change in biology is not continuous—it’s radical, something which Darwinian theory fails to explain. He discusses how Darwinian evolution is blind to the future as there is no fidelity to the facts. He gives examples of amino acids and dogs and explains why there cannot be just one species. He further strengthens his statement by saying that everything cannot be accounted for as being random: there should be some scientific evidence to support it. Berlinski responds to Peter Robinson’s question about Razib Khan’s statement to the effect that, “The seeds of both tyranny and democracy were sown by the evolutionary pressures that shaped humans over millions of years.” He argues that the deepest aspects of our nature are not formed by evolutionary pressures because evolution is relatively neutral. He also replies to Robinson’s question about a remark of Pope Benedict XVI to the effect that Western thought, by its very nature, “excludes the question of God, making it appear an unscientific or pre-scientific question.” He explains that it is not right to argue that physical theories imply that the conclusion is antitheist, as mere exclusion in these theories does not imply that. Robinson further asks Berlinski’s views about the growing population of Islam and decreasing population of Europeans in Europe. Berlinski explains that Muslims take religion seriously, but theology/religion has more or less disappeared from the Western habit of thought. He states that faith and religion should come together. Berlinski further talks about how Albert Einstein’s comments disprove God, not because he is an antitheist, but because Einstein wanted to push quantum theory and his belief in the rational universe” (Uncommon Knowledge).

Stephen Meyer: Darwin’s Doubt was delivered on Mar 18, 2019. According to a nationwide survey, more than two-thirds of atheists and one-third of agnostics believe that “the findings of science make the existence of God less probable,” while nearly half of self-identified theists believe “the findings of science are neutral with regard to the existence of God.” But what if there is another option? What if the discoveries of science actually lend support to belief in God? Taped at the 2019 Dallas Science and Faith Conference at Park Cities Baptist Church in Dallas sponsored by Discovery Institute’s Center for Science and Culture (YouTube).

Meyer’s suggests that a branch of Evolutionary Genetics, Population Genetics when given certain factors can estimate how much evolutionary change can occur in a given amount of time – these factors are population size, generation time, mutation rates, the resulting estimate that the 5 to 6 million years for Darwinian Evolution to have occurred is mathematically too short for the changes to occur. However, Meyer suggests that with the idea of Synchronistic Genetics, the processes of evolutionary genetics would have the necessary time (See 14:00 – 17:55 time).

David Gelernter: “The Tides of Mind” | Talks at Google • May 2, 2016 . Gelernter is a professor of computer science at Yale. In the 1980s, he made seminal contributions to the field of parallel computation, specifically the tuple space coordination model, as embodied by the Linda programming system. Gelernter visited Google’s office in Cambridge, MA to discuss his book “The Tides of Mind: Uncovering the Spectrum of Consciousness”. The book is an exploration of the human psyche that shows how the purpose of the mind changes throughout the day. Gelernter explains that, when we are at our most alert, when reasoning and creating new memories is our main mental business, the mind is a computer-like machine that keeps emotion on a short leash and attention on our surroundings. As we gradually tire, however, and descend the “mental spectrum,” reasoning comes unglued. Memory ranges more freely, the mind wanders, and daydreams grow more insistent. Self-awareness fades, reflection blinks out, and at last we are completely immersed in our own minds (YouTube).

My yard needs tending, I’ll be back to the future…

1 Response to The Mathematical Challenge to Darwin and Wallace