Posted on November 3, 2020 by Steven Scherling

What of the U.S. Presidential Election?

In the night (12:30 am/11.03.20), I had a dream that I was with about 20 people crowded into a bus and required to arrange themselves to be able to survive together. I assumed a leadership role and slowly with everyone cooperating, we were able to work out where to sit and put our bags. I ended sitting in a key authority /power seat just behind the main door. I saw Fannie was in the long back seat, seems now sleeping. We were off to somewhere in space in time.

I was next up at 1:25 am preparing my book, The I Ching or Book of Changes Wilhelm/ Baynes, my Chinese coins, and notebook to record I’s answer. I then realized I wanted to wait until 2am so that at least the Mainland US was into 11.03.2020. I placed the coins on The Book of Changes, placed my hands over them, and lay my head down, imaging I was floating high enough to have a full view of the US. With a little shift in my view, I saw in the distances Alaska and Hawaii. I thought I was about over Kansas – no I did not see Dorothy or a Witch. 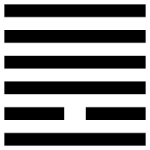 The image of the upper trigram Ch’ien is heaven, and that of the lower, Li is flame. It is the nature of fire to flame up to heaven. This gives the idea of fellowship. It is the second line that, by virtue of its central character, unites the five strong lines around it. This hexagram forms a complement to Shih, The Army (7). In the latter, danger is within and obedience is without – the character of a warlike army, which, in order to hold together, needs one strong man among the many who are weak. Here, clarity is within and strength without – the character of a peaceful union of men, which, in order to hold together, needs one yielding nature among many firm persons.

THE JUDGEMENT
Fellowship with men in the open.
Success.
It furthers one to cross the great waters.
The perseverance of the superior man furthers.

True fellowship among men must be based on a concern that is universal. It is not the private interests of the individual that create lasting fellowship among men, but rather the goals of humanity. That is why it is said that fellowship with men in the open succeeds. If unity of this kind prevails, even difficult and dangerous tasks, such a crossing the great water can be accomplished. But in order to bring about this sort of fellowship, a persevering and enlightened leader is needed – a man of clear, convincing, and inspiring aims and the strength to carry them out. (The inner trigram means clarity and outer, strength.)

THE IMAGE
Heaven together with fire:
The image of FELLOWSHIP WITH MEN.
Thus the superior man organizes the clans
And makes distinctions between things.

Heaven has the same direction of movement as fire, yet it is different from fire. Just as the luminaries in the sky serve for the systematic division and arrangement of time, so human society and all things that really belong together must be organically arranged. Fellowship should not be a mere mingling of individuals – that would be chaos, not fellowship. If fellowship is to lead to order, there must be organization within diversity.

THE LINES
Nine at the beginning means:
Fellowship with men at the gate.
No blame.

The beginning of union among people should take place before the door. All are equally close to one another. No divergent aims have yet arisen, and one makes no mistakes. The basic principles of any kind of union must be equally accessible to all concerned. Secret agreements bring misfortune.

Six in the second place means:
Fellowship with men in the clan
Humiliation.

There is danger here of formation of a separate faction on the basis of personal and egotistic interests. Such factions, which are exclusive and, instead of welcoming all men, must condemn one group in order to unite the others, originate from low motives and therefore lead in the course of time o humiliation.

Nine at the third place means:
He hides weapons in the thicket,
He climbs the high hill in front of it.
For three years he does not rise up.

Here fellowship has changed about to mistrust. Each man distrusts the other, plans a secret ambush, and seeks to spy on his fellow from afar. We are dealing with an obstinate opponent whom we cannot come at by this method. Obstacles standing in the way of fellowship with others are shown here. One has mental reservations for one’s own part and seeks to take his opponent by surprise. This very fact makes one mistrustful, suspecting the same wiles in this opponent and trying to ferret them out. The result is that one departs further and further from true fellowship. The longer this goes on, the more alienated one becomes.

Nine in the fourth place means:
He climbs up on his wall; he cannot attack
Good fortune.

Here the reconciliation that follows quarrel moves nearer. It is true that there are still dividing walls on which we stand confronting one another. But the difficulties are too great. We get into straits, and this brings us to our senses. We cannot fight, and therein lies our good fortune.

Nine in the fifth place means:
Men bound in fellowship first weep and lament,
But afterward they laugh.
After great struggles, they succeed in meeting

Two people are outwardly separated, but in their hearts they are united. They are kept apart by their positions in life. Many difficulties and obstructions arise between them and cause them grief. But, remaining true to each other, they allow nothing to separate them, and although it costs them a severe struggle to overcome the obstacles, they will succeed. When they come together their sadness will change to joy. Confucius says of this: Life leads the thoughtful man on a path of many windings. Now the course is checked, now it runs straight again. Here winged thoughts may pour freely forth in words. There the heavy burden of knowledge must be shut away in silence.
But when two people are at one in their inmost hearts, They shatter even the strength of iron or of bronze. And when two people understand each other in their inmost hearts, Their words are sweet and strong, like the fragrance of orchids.

Nine at the top means:
Fellowship with men at the meadow.
No remorse.

The warm attachment that springs from the heart is lacking here. We are by this time actually outside of fellowship with others. However, we ally ourselves with them. The fellowship does not include all, but only those who happen to dwell near one another. The meadow is the pasture at the entrance to the town. At this stage, the ultimate goal of the union of mankind has not yet been attained, but we need not reproach ourselves. We join the community without separate aims of our own.